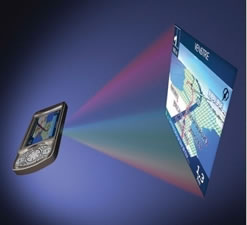 Cell Phones to get Projectors soon

ILJIN Display Korea has announced that they successfully finished the development of an ultra small single LCD panel for digital projection. Unlike traditional projectors which have 3 LCD panels (Red, Green and Blue) this new single LCD panel can play the role of those three panels by itself claims ILJIN. This not only reduces the size of the product but also the price. This single LCD panel is expected to be installed in small portable digital devices like cell phones, PDA, portable game consoles, digital cameras, notebooks etc. So all you need is a PMP or cellphone to watch your favourite movie on the large screen.

Seung Kwon, CEO of the company, said they plan to start mass production of an entry level single LCD panel for digital projection in September 2006; In January 2007, they will start to make single LCD panel and engine modules for pocket digital projectors. They also have a plan to make ones for cell phones in April 2007.
Source