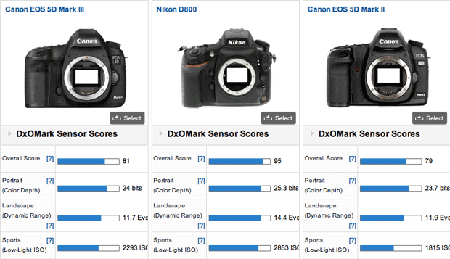 The memories 5D Mark II by Canon are still livid in mind and with the fervor that we approached it then, do we march on to its next rendition. However, there’s considerable disappointment with the first look, post tests, as the 22-megapixel sensor on the Canon 5D Mark III doesn’t seem to be too impressive, some say. The tests conducted by DxO Labs concurred that there is considerable improvement but that’s where the story ends. Nothing phenomenal. The scores for the Canon 5D Mark III trailed the Nikon D800 considerably.

The tests included various conditional shooting and other tests. Among the many tests that put the Nikon power house ahead was the Canon 5D Mark III failing to outdo the former in dynamic range at lower ISO.
CNet