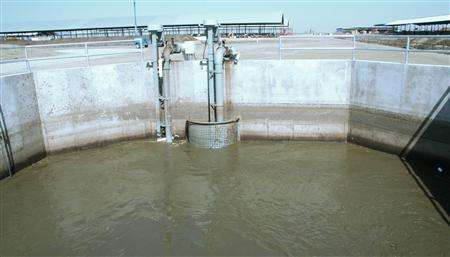 Californian cows gassing up the grid.

On a dairy farm in the Golden State’s agricultural heartland, utility PG&E Corp began on Tuesday producing natural gas derived from manure, in what it hopes will be a new way to power homes with renewable, if not entirely clean, energy. The Vintage Dairy Biogas Project, the brainchild of life- long dairyman David Albers, aims to provide the natural gas needed to power 1,200 homes a day, Albers said at the facility’s inauguration ceremony. As cow manure decomposes, it produces methane, a greenhouse gas more potent than carbon dioxide. Scientists say controlling methane emissions from animals such as cows would be a major step in addressing climate change. Enter the Vintage Dairy project. As luck would have it, methane can be captured and treated to produce renewable gas, and California regulators have directed PG&E and other utilities to make renewable energy at least 20 percent of their electricity supplies by 2010. PG&E expects to reach 14 percent this year, thanks in small part at least to its partnership with BioEnergy Solutions. To tap the renewable gas from cow manure, the Vintage Dairy farm first flushes manure into a large, octagonal pit, where it becomes about 99 percent water. It is then pumped into a covered lagoon, first passing through a screen that filters out large solids that eventually become the cows’ bedding. The covered lagoon, or “digester,” is the size of nearly five football fields and about 33 feet deep. It is lined with plastic to protect the ground water and the cover, made of high density polyethylene, is held down at the edges by concrete. The digester’s cover was sunken into the lagoon on Tuesday, but officials said it would be taut and raised in a few days as the gas collects underneath it. Weights on top of the digester channel the gas to the small facility where it is “scrubbed” of hydrogen sulfide and carbon dioxide. The end product is “close to 99 percent pure methane” according to BioEnergy Chief Operating Officer Thomas Hintz. Once it is treated, the gas is injected into PG&E’s pipeline, where it will be shipped to a power plant in Northern California.

In practice, however, not every dairy could participate in such a project because some are not located close enough to the necessary gas transmission lines, PG&E officials said. Still, for now there are plenty of dairies to get on board. Fresno County has already agreed to join the Vintage Dairy project and Albers estimated gas from the two dairies combined could power 2,500 homes a day. The Vintage Dairy facility could accommodate gas from up to two or three more dairies, depending on the size.
Source