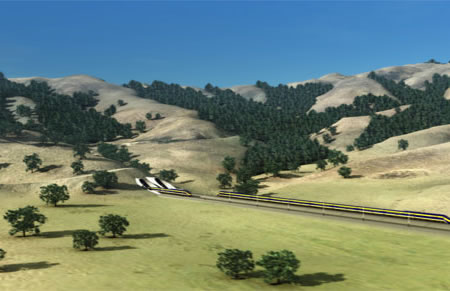 California gives the go ahead for the Electric bullet train

For a quarter-century, it has been a California dream on one drafting board or another — a bullet-train system so novel, environmentally friendly, and fleet that it could reshape transportation in the car-crazy Golden State. With gas prices high, highways congested and airports jammed, it would seem the best of times for a bullet train. However, it seems the worst to some people, with Wall Street in meltdown, California facing a perpetual budget deficit and the lurking specter of September’s horrific commuter-rail accident in Los Angeles. California voters approved Proposition 1A, the Safe, Reliable High Speed Passenger Train Bond Act Tuesday by a margin of four percentage points. The act approves nearly $10 billion in bond money to build a modern bullet train linking northern and southern California that is expected to reduce air pollution by taking cars off the road. The train would connect San Francisco to Los Angeles and would cost some 45 billion dollars.

It would be financed roughly one-third each by the state, federal government and private sector, with construction to begin in 2011 and trains rolling by 2020. When completed it is envisioned that a trip from San Francisco to Los Angeles would cost $55 and take little more than 2 ½ hours. Bakersfield to downtown Los Angeles would take only 54 minutes.
Source