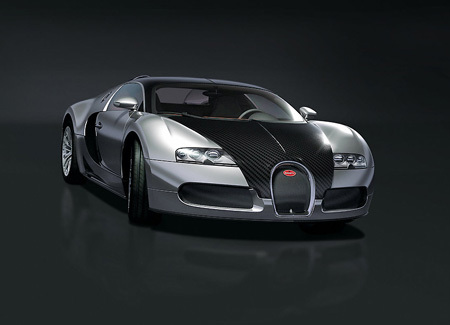 With oil hovering around $100 per barrel the oil rich sheiks of the Middle East are laughing all their way to the banks and the nearest car showroom. Did you know one of out every five Bugatti Veyron’s sold is in Dubai. How do you make your $1.3 million car more exclusive? You get the Bugatti Veyron Pur Sang (a really lame name) limited just to 5-units worldwide these special-edition Veyron were all immediately sold at a $300k premium. Pur Sang means ‘Pure blood’ in French and the chromed Veyron is differentiated by its paintjob, or rather, lack thereof. The body panels were assuredly polished but left in their natural state of aluminum and carbon fiber, the separation between which does not follow along the lines of the traditional Veyron’s two-tone color scheme.
So basically you pay $300k for not getting a paint job.