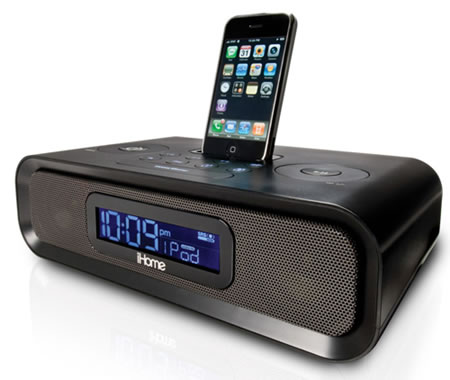 The iHome iP99 has the honor of being the first iPhone clock radio that docks, charges and plays both the iPhone and all docking iPod models. This cool speaker system performs all its functions without forgoing any of its functionality. What this really means is that you can listen to the music on your iPhone via speakers and still receive calls. The proprietary Reson8 speakers, which produce 10 watts of power are featured in the system. Specs include an AM/FM radio, alarm buzzer and a remote that controls both iPhone and iPod functions and menus.

Brookstone iHome iP99 Clock Radio for iPhone will be out by 1st June. The iP99 also features are designed to deliver outstanding clarity and depth.
Source