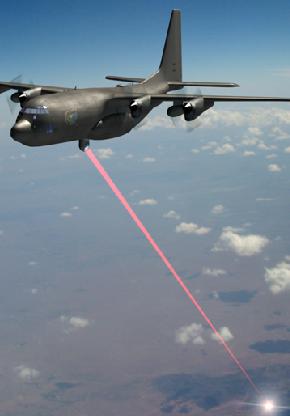 Boeing has announced that it had fitted a high-energy laser cannon aboard a C-130 Hercules military cargo plane, creating a “Laser Gunship”. The company expects to commence blasting “mission representative” test targets next year, firing deadly energy bolts from a “rotating turret that extends through the aircraft’s belly”. This flying-raygun project is called the Advanced Tactical Laser (ATL), as distinct from Boeing’s other aerial beam cannon effort – the jumbo-jet mounted Airborne Laser (ABL). The 747 laser is intended to fry enemy nuclear missiles lifting from their silos, and needs immense range and power – hence the requirement for a massive carrying aircraft. The ATL Hercules blaster-weapon is seen more as a Ray-gun for every day, zapping things or people during more routine battles as opposed to saving the USA from atomic destruction. This should let it operate closer to its targets, reducing the weight of the system and thus the size of aero plane required to carry it. It can zap you 100 times before it needs a reload with some serious maintenance. Exact specs on performance are hard to come by, but usually reliable sources have suggested useful ranges up to 10 or 20 km, and power outputs in the 100 kilowatt range – perhaps focused on an area only four inches wide.

It can do everything what a normal C-130 gunship would do, but only it is much expensive and hey lasers are cool.
Source