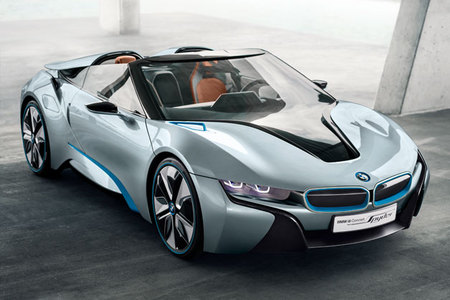 When it comes to designing cars that simply look splendid, Lamborghini has been running ahead all this while, until now. Bavarian automaker BMW has just pulled the veil off the topless version of its drool-worthy concept supercar that seems to have been plucked out the future, the i8. Called the i8 Spyder, this BMW is based on the previously unveiled i8 Coupe and is a plug-in through-the-road hybrid with a 96 kW (131 horsepower) electric motor nestled inside that lends power to the front wheels. Also, with a mid-mounted turbocharged three-cylinder gas engine producing 223 hp to power the rear wheels, the i8 Spyder touches the 62mph mark in under 5 seconds and brags of a top speed of 155 mph, good enough to make you wish you’d left the roof on. Sporting a convertible roof design, this one’s nearly the same as the i8 Coupe concept, with a few minor changes made to the exterior, making it a little more production friendly.