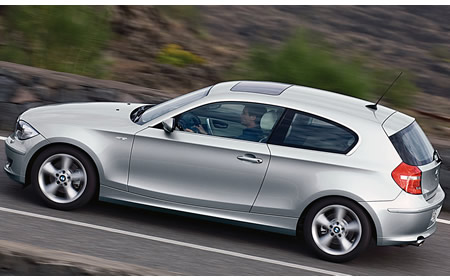 BMW has just revealed the 2007/2008 BMW 1-Series three-door hatchback. This fresh car goes on sale this spring, and will be offered with various engine choices in Europe. Unfortunately it’s not certain if the three-door model will be offered in the United States, but coupe and convertible variants are expected in America in the coming years. The styling has remained largely unchanged from that of the standard car, except for the removal of the rear doors. Even the wheelbase has stayed the same, with the addition of a longer front door giving a sporty appearance. The shape also emphasizes the neat boomerang-like C-pillar. Model choices include the 130i model, with a 265 horsepower inline-six and a zero to 62 mph time of 6.0 seconds as well as the 120i with a 170 horsepower four-cylinder engine and a zero to 62 mph time of 7.7 seconds.