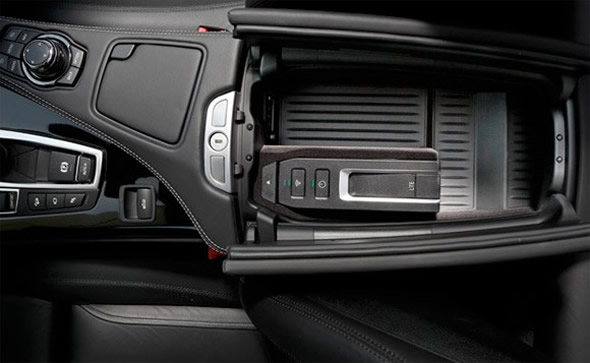 If it’s speed on the road then why not speed through your browser? BMW will ensure just that with the promise of a LTE Hotspot that will come in-built within the browser. All you need is an LTE-compatible SIM Card that is inserted into the hotspot and enjoy 4G speeds on up to eight Wi-Fi devices. It can pair via a PIN or a NFC chip. In a statement, BMW said, ‘The BMW Car Hotspot LTE connects to the internet using the vehicle aerial. This means that reception cannot be impaired for example by tinted windows, while also preventing radiation inside the vehicle. But it is also possible to use the BMW LTE Hotspot even without a docking station. In this case, using an optionally available adapter and mini-USB cable, the power is provided by plugging the BMW Car Hotspot LTE into the cigarette lighter. This means the hotspot can be used in any vehicle.’ The statement also says, ‘The BMW Car Hotspot LTE can also be used outside the vehicle away from an external power supply thanks to the built-in battery that can be recharged in about 30 minutes, either at a power socket or at the docking station.’


There’s no word on the pricing at the moment, though we expect more details for a European launch. I wonder why things are being added to the existing distractions that drivers are subjected to.