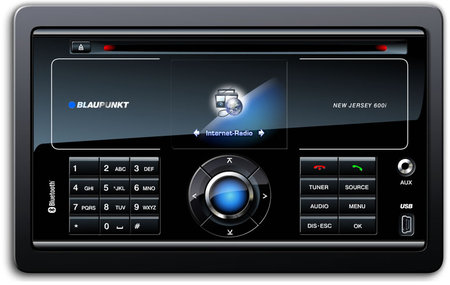 Blaupunkt partners with miRoamer for Internet Radio for the Car

This year’s CES will see Blaupunkt and miRoamer put an Internet radio into car dashboards and that too for the first time. “miRoamer’s development with Blaupunkt is the first seamless Internet radio solution,” said miRoamer founder and CEO George Parthimos. “With the simple push of a button, users can access AM/FM stations or Internet radio’s thousands of music, entertainment, news and talk stations from around the world, all from the same car stereo.” miRoamer spokesman Ryan Greives further explains, “The first model will connect to a 3G/HSDPA/HSPA device via Bluetooth for Internet connectivity. When connecting to the Internet via an external device (such as an iPhone), the customer’s existing mobile service provider is the default network, various models are in the pipeline which may have an internal modem.”

Seen here are the prototypes New Jersey 600i and the Hamburg 600i. They will provide access to tens of thousands of miRoamer stations when they are hooked to a smartphone on an unlimited data plan. These stereos also offer phone, address book and navigation via Bluetooth. One of the clever options available is to post your playlist files indicating various MP3s on the Internet, on a free blog site. They don’t occupy much disk space and since they just link to remote files you could bookmark those playlists on the Blaupunkt radio to access it all from the road. You can even customize favorites, search options and more via your computer at miRoamer.com and access them later through the radio.
Source