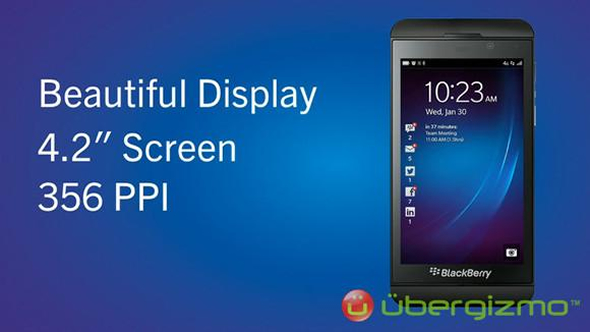 Somewhere in New York City, the much heralded and expected BlackBerry Z10 finally took its first steps into gizmo-kind. It will though be sprinting across yards in the UK from tomorrow onward but what we know now is that the device will come with a 4.2-inch display screen that boasts a pixel density of 356 ppi, thus rivaling Retina Display. Additionally it will also offer deeper Facebook integration on the celebrated BlackBerry 10 OS, a stronger back surface, finer browsing, a virtual keyboard that’s likely to impress loyal BlackBerry QWERTY users and multiple language support.


Other than this, the BlackBerry Z10 is expected to arrive with a Qualcomm Snapdragon MSM8960 dual-core chip, 2GB of memory and 32GB internal storage, a microSD slot for expansion and an 8-megapixel camera. Is it redemption time for RIM after all?