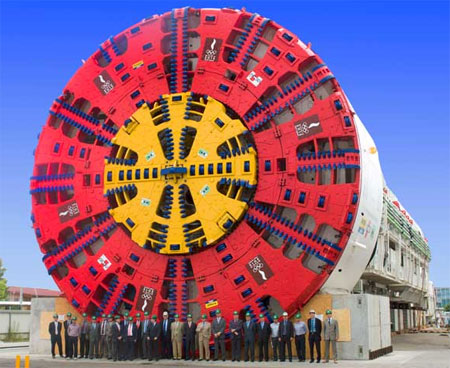 Billionaire will dig tunnel linking Russia & US under the Baring Strait

Russian billionaire Roman Abramovich forked out $160 million for the world’s largest drill fueling talks of a massive tunnel between Europe and America. The project would link Russia’s far eastern Chutoka region, which Abramovich governs, with America’s Alaska. The drill will be built by Germany’s Herrenknecht AG and will the first drill capable of boring a four-lane tunnel.through the 55-mile wide Bering Strait. A leading British daily is speculating that Russian President Putin is already in talks with Washington for the tunnel. The tunnel would open up lucrative freight routes from Europe and allow Russian gas along with cheap Chinese goods to be easily exported. The cost of the
(Pictured above is the Herrenknecht EPB Shield S-300 mega tunnel boring machine built to excavate a road tunnel in Madrid)
Via – Reuters