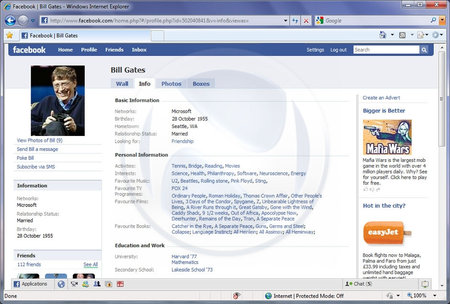 The richest man in the world can surely be a great friend to you. You in turn can always play the friend-in-need role or at least hope that he invites you to one of the many parties that he hosts. But alas, that’s not possible anymore. Bill Gates, finally decided to give up the idea of using Facebook for the simple fact that it exposed his identity to fans and others who wanted to befriend him. This resulted in a huge upsurge of add requests, totaling up to 10,000. I am a regular Facebook user and rejecting even 3 requests from dorks on a single day gets me pissed off. I wonder if the man worked on his Facebook account himself or if he employed someone for the same. How about the mastermind of programming languages designing a little filter application for Facebook that could help us all? But damn. He simply gave up.

Some interesting facts of the man’s life have been added to the accounts sections, thus distinguishing him from the many fakes who prowl the social networking site with his name.