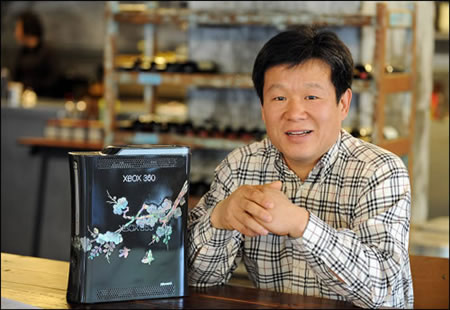 When Bill Gates met President Lee Myung-bak at Cheong Wa Dae on May 6, the Microsoft chairman came bearing a very special gift: a Microsoft Xbox video game console inlaid with traditional Korean mother-of-pearl. In fact 100 similar Xboxes are being prepared by a Korean artisan, intended as special VIP gifts from the Microsoft chief. The decoration is the handiwork of Kim Young-jun, the head of a manufacturing company called Gookbo. Microsoft was looking for a unique decoration representing traditional Korean beauty. Kim decorated the console with mother-of-pearl ume flowers and butterflies symbolizing patience and perseverance and treated the surface with a special substance. He entitled the final product “Peace”.

I’m expressing my hopes for world peace through the ume flowers and butterflies existing together in harmony Kim said. He made three such Xboxes — one for President Lee, one for Gates and another as a “just-in-case” spare, which he is holding onto himself.
Via – Luxurylaunches