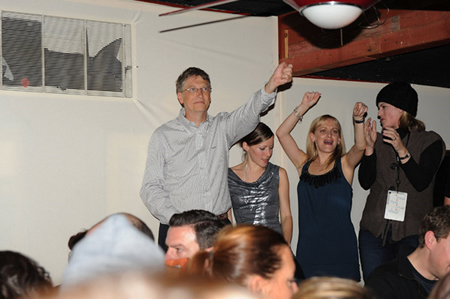 Bill Gates gets down and gets groovy at Sundance with his Bing.com team

Bill Gates was in Sundance recently to attend the documentary called “Waiting For Superman”, a story about America’s deteriorating public education system. He also apparently met with the Sundance Kid himself, Robert Redford. But that’s not interesting enough to talk about when we’re discussing Microsoft’s front man. That’s also not what this is about. What this is about is Mr. Gates ‘gait’ or to put it another way the way he shakes his ‘grove-thang’. Yup, Bill gates sponsored an after-hours party at Sundance for his Bing.com team and was right in the middle of the festivities. Well more like towards the side, but nevertheless it looks like he’s getting down with this peeps and proving that geeks are cool too. More or less. Party on Bill!