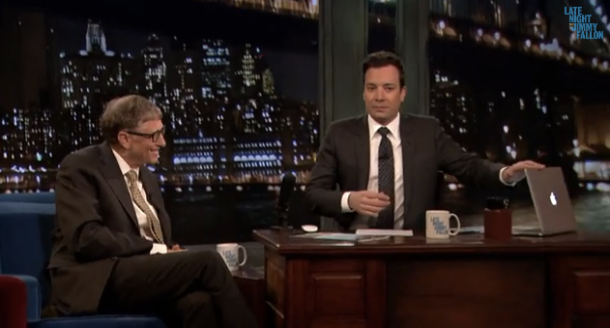 Bill Gates in the last few years has entirely shifted his focus from technology to philanthropy and was in the news recently for two separate matters attached to his philanthropic endeavors. One was his comment that the world will have no poor countries by 2035 and the other news was India is free of Polio and Bill & Malinda Gates foundation has contributed heavily for it. While interviewing Bill Gates, Jimmy Fallon on his show committed the most classic faux pas on television and the video has gone viral on YouTube.

The interview started well on the Late Night with Jimmy Fallon show as Jimmy congratulated Bill for his philanthropic achievements. He even called Bill Gates ‘Cool!’ and then shifted the focus on technology. That’s when Jimmy realized he has a Mac Book on his table which Bill Gates was constantly noticing while answering. Fallon abruptly stopped showing some fake shame. “This is very disrespectful,” he said, as he quickly tried to close the MacBook and hide it and then moved away the Apple keyboard and mouse. Gates might have merely smiled nodding his head but the video has gone viral on YouTube. Watch the video after the jump.