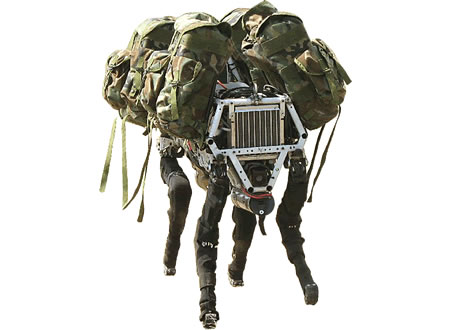 No this is not another Transformer movie clip, what you are looking at is the most advanced quadruped robot on earth. Called BigDog it is a quadruped robot that walks, runs, and climbs on rough terrain and carries heavy loads. A gasoline engine that drives a hydraulic actuation system powers BigDog. BigDog’s legs are articulated as an animal’s, and have compliant elements that absorb shock and recycle energy from one-step to the next. BigDog is the size of a large dog or small mule, measuring 1 meter long, 0.7 meters tall and 75 kg weight. BigDog is being developed by Boston Dynamics with the goal of creating robots that have rough-terrain mobility that can take them anywhere on Earth that people and animals can go. The Defense Advanced Research Project Agency (DARPA) funds the program. In separate trials, BigDog runs at 4 mph, climbs slopes up to 35 degrees, walks across rubble, and carries a 340 lb load.

With an on-board computer that controls locomotion, servos the legs and handles, a wide variety of sensors the control system manages the dynamics of its behavior to keep it balanced, steer, navigate, and regulate energetics as conditions vary. Sensors for locomotion include joint position, joint force, ground contact, ground load, a laser gyroscope, and a stereo vision system. Other sensors focus on the internal state of BigDog, monitoring the hydraulic pressure, oil temperature, engine temperature, rpm, battery charge and others.
Source