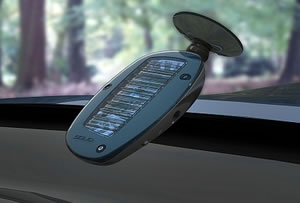 Better Energy Systems has unveiled its latest offering at the Mobile World Congress called the Solio Communicator which is a hands-free car kit, designed to be mounted on the visor. The device connects to a mobile phone via Bluetooth and is ideal for sunny places. Also the Communicator comes with its own Li-Ion battery, allowing it to work at night as well. The battery is automatically charged using the solar power and also by a USB cable. Solio Communicator weighs only 150 grams and has a hi-fi directional microphone under the hood, providing maximum clarity while making or receiving calls. The kit is slated to hit the markets in mid-2009 at a price of Euros 80.it’s nice to see many companies going green reducing the pressure on Nature.
[Intomobile]