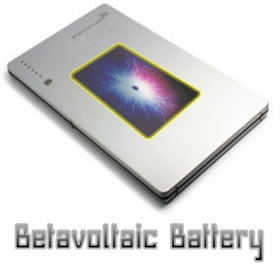 Betavoltaic batteries can power your laptop for 30 years without recharging

The worst part about laptops or any gadget working on batteries is the constant hassle of recharging. Fuel cells currently in development promise upto 40 hours of continuous power supply however a new technology being developed by the air force can render them absolutely useless – Betavoltaic batteries as they are called can provide your laptop with power for an unbelievable 30 years without recharging. The batteries are constructed from semiconductors and use radioisotopes as the energy source. As the radioactive material decays it emits beta particles that transform into electric power capable of fueling an electrical device like a laptop for years. Thought they may sound nuclear, they are not, so your laptop battery cannot blow up with the entire neighborhood.
Betavoltaics generate power when an electron strikes a particular interface between two layers of material. The Process uses beta electron emissions that occur when a neutron decays into a proton which causes a forward bias in the semiconductor. This makes the betavoltaic cell a forward bias diode of sorts, similar in some respects to a photovoltaic (solar) cell. Electrons scatter out of their normal orbits in the semiconductor and into the circuit creating a usable electric current.

The batteries can be quite small and thin, a porous silicon material is used to collect the hydrogen isotope tritium which is generated in the process.
The reaction is non-thermal which means laptops and other small devices like mobile phones will run much cooler than with traditional lithium-ion power batteries. The reason the battery lasts so long is that neutron beta-decay into protons is the world’s most concentrated source of electricity, truly demonstrating Einstein’s theory E=MC2.
The good news does not end here once the battery runs out of juice i.e. after 25 – 30 years it becomes inert and non toxic. If all goes well the Jesus battery could hit shelves in 2 – 3 years. Apart from gadgets its main use could be cars if it can power a laptop for 30 years surely a reasonably sized battery can drive a car for 1500 – 2000 miles without recharging.
Source