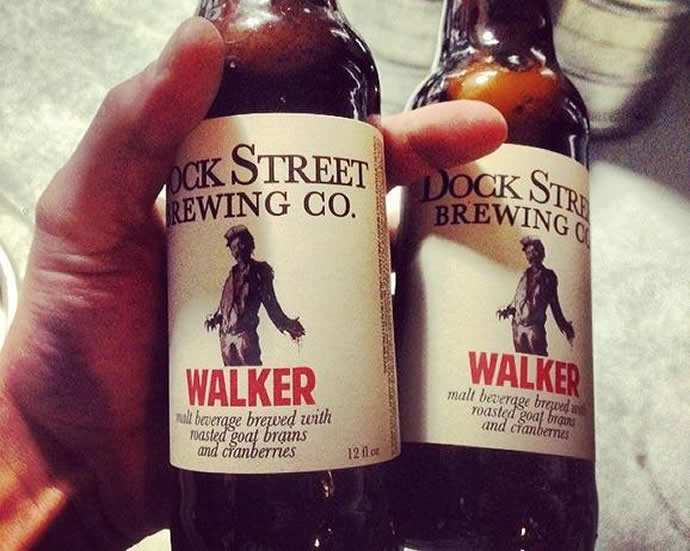 A beer made with goat brains for zombies, by the Dock Street Brewing Company

Zombies don’t really have a long list of food preferences. Most often, these folks who’ve come back from the grave to visit us and chew on our brains are usually restricted to eating human flesh. However, the Dock Street Brewing Company in Philadelphia decided to give our bumbling walking dead something to wash down all the human meat, something that’s intoxicating enough to have them frequent bars, just the way they did in Shaun of the Dead. Dock Street’s Walker beer is now up for sale, made from the best wheat, oats, flaked barley, organic cranberries and goat brains available. Yes, you read that right, goat brains!

Justin Low, the head brewer of Dock Street, loves the Walking Dead just as much as we do, which is probably why he had this beer created, for all his zombie buddies. The beer is an American pale stout and though the recipe followed to create this brew won’t really sound too appeasing to most folks, we think it’s quite brilliant and might just taste as well too! The beer will get its official release at Dock Street on March 30 alongside the screening of “The Walking Dead” season finale. Drooling, slurred vocabulary and a limping walk could be added side effects of the Walker beer.