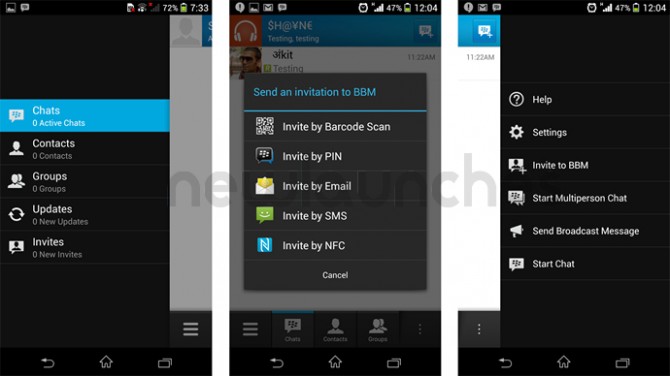 BBM Finally makes it to Android and iOS, so what’s the big deal?

BBM was launched for both the major mobile operating systems last night and it looks like all is well, more or less. The application hit the Apple App Store first, before slowly making it to the Android Market Place. Initially just the BBM App icon was visible if searched for via the mobile app but selecting it only brought up errors like ‘No Item found’. Hours later I was still unable to access the link via the official website Play Store link nor was I able to find the app via the search box there. Oddly enough, it was nevertheless already available via the mobile Play Store app where I downloaded it onto my Nexus 4 and Sony Xperia Z1. I haven’t had the opportunity to test the app on iOS, but here’s a quick account on what it’s like on Android. 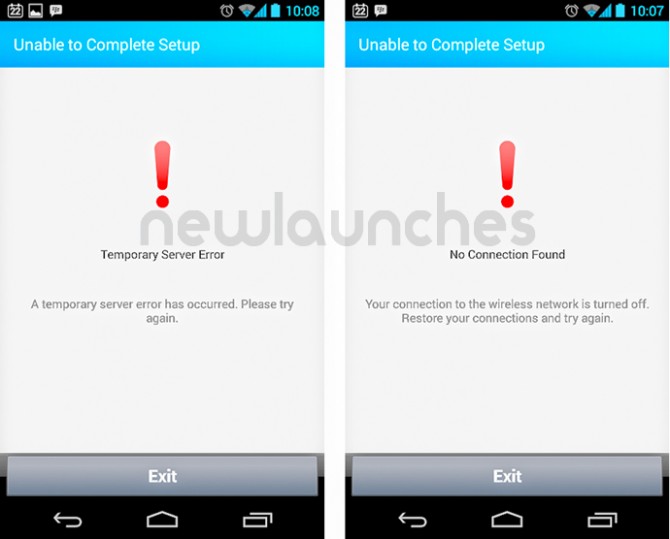 Now please understand that some of the bugs I encountered might not mean they are generic, some of you might have no issues at all. So, to kick things off, weird thing, I downloaded the app onto the Xperia Z1 first and I was able to log in to my existing BlackBerry account in the first try. I found no bugs or issues with the app at all. All of this was just fine via WiFi. I then tried downloading the app onto my primary device, i.e. a Nexus 4. The app installed just fine but I was unable to log in with the same BlackBerry ID that was running on the Z1. I was in queue and was asked to be patient. Yeah, like that was going to be easy all things considered. As you might recall, this launch was supposed to happen a few weeks ago but the powers that be hadn’t quite worked out the kinks in time so it was pushed back. Nevertheless, I waited for a few hours, and all this while, it was still working like a charm on the Z1.

When dawn broke, I checked to see if I could log in and switched off the WiFi on my Nexus 4 assuming BBM would run fluidly on 3G. I was unable to connect. The welcome page refused to open and I was met with a ‘No Connection Found’ error. Switching back to WiFi, all was clear. I was no longer in queue and reached the BlackBerry ID log in page. After logging in however, the next error on my screen was that there was a ‘Temporary Server Error’ and I was asked to try again. This was the case for at least 2 hours and didn’t change even after a reboot. It was still unable to connect while I was writing this article. And again, I was still connected on the Z1. And each time I switched my Nexus 4 to 3G a connection error popped up but it worked just fine on the Z1 (even on 3G).

Let’s talk about the UI – using a very BB10-esque interface with a BB10 complete with side bar styled menu setups looks good. Large icons and clean cut interface gives it a good feel. There’s nothing new here though, at all. It does everything that it’s supposed to just like you’d expect from a standard BB device and NOT a BB10 device with the latest BBM update. As of now you’ll able to chat, send images and Voice Notes, create groups and that’s pretty much it. If you were expecting screen sharing or video chatting capabilities, think again.

At the end of the day, BBM on Android or iOS, is, for now, just another Whatsapp in disguise. So you’ll able to chat with friends who own BlackBerrys… oh wait… you could do that already since they already, in all likelihood, downloaded Whatsapp to talk to you. BBM for the OS’ runs in the background and there seems to be no way to sign out without Force Stopping the app itself. A little BBM chat icon will always be displayed in Android’s notification section and simply tapping the app icon in the menus will instantly log you in. 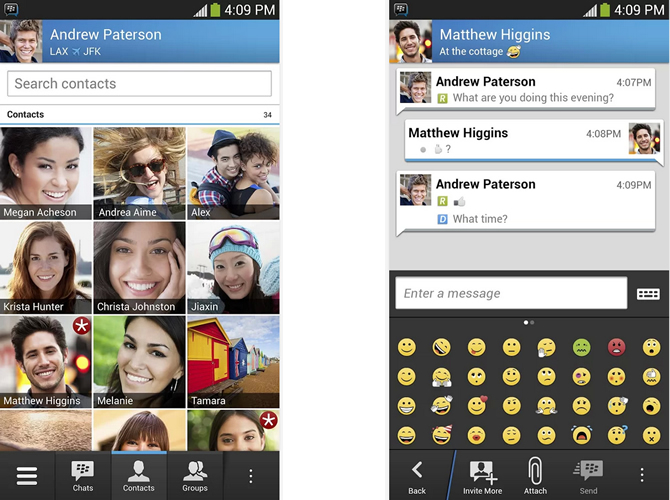 I fail to see what the big deal is and truth be told, it seemed like an exciting prospect initially since this was probably the biggest move the company has made in a long time. Sharing a resource like BBM for the masses meant giving up a part of their exclusivity and was nothing we saw coming till rumors leaked about it months ago. Till BlackBerry gives BBM on other OS’ the same functionality as it on BB10 devices, it’s just another chat app that will have a hard time competing with the likes of Whatsapp and even Google talk aka Hangouts which even has an option for sharing images and having video calls. I’m sure Windows Phone users are cringing at this very moment!