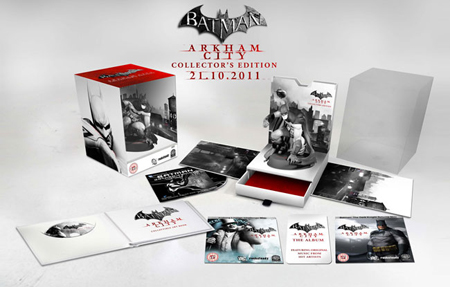 When we heard about the new Arkham City release we were blinded by the amazing game’s caliber to even think beyond the pack. Now, we’re ready to take on another huge surprise from the franchisee that has declared the Batman Arkham City Collector’s Edition pack. This packs is bound to be loaded with a butt-load of goodies. These include ‘a custom Batman statue, collectible art book, early DLC access, the Batman: Arkham City soundtrack, the DC Universe animated original movie Batman: Gotham Knight and four collectible cards.’

The game will be running wild on PC, PlayStation 3 and Xbox 360. The date reads as 21st October 2011. Can’t wait, really!
Geeky-Gadgets