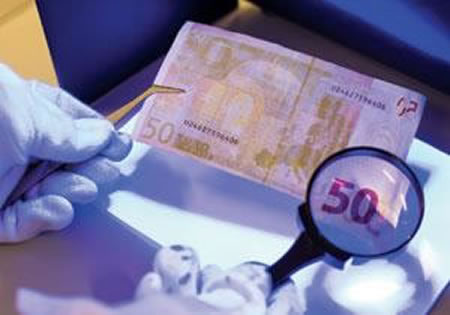 The technology involves adding programmed electronic circuits on the notes which will serve the purpose of both authenticity confirmation and banknote tracking. Since silicon based electronic circuits would be too thick here, a team of German and Japanese researchers have developed arrays thin-film transistors (TFTs). Layer by Layers of TFTs will be created by carefully depositing gold, aluminium oxide and organic molecules directly onto the notes through a patterned mask. The end ouput would be an undamaged banknote with as much 100 organic TFTs, each of them measuring less than 250 nanometers. Something similar to RFID technology will be used by an external reader to test these bank notes.
As of now, this technique has been tested on US dollars, Swiss francs, and Japanese yen and Euro notes. If this turns out to be a viable option it could take care of at least one of the many impeding issues affecting economies around the world.
[NewsScientist]