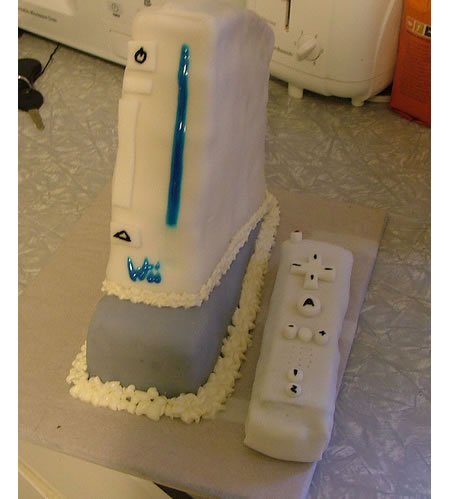 Bake a Wii Cake and eat it too!

Always wanted that Wii shaped cake, ever since I got addicted to the game. I wonder if anyone will do the Wii Mat once it becomes a rage? Any ways here is a recipe that most are going to drool over, apparently Brian Walak got inspired by seeing the Wii Cake featured on The Wired magazine and since Martha Stewart (the designer for the cake) had created an inedible version he created one that could be polished off. “I didn’t get to share my recipe with her, although she did make a comment about how my cake was edible,” says Walak about his appearance on her show. Hit the jump to see what his recipe is like.

What Brian Walak did to get his Wii Shaped Cake right:
Use Betty Crocker yellow cake mix. Don’t use chocolate, as it didn’t hold together as well for Walak.
Don’t just stand a single piece of cake vertically. That’s the obvious and wrong choice. Instead, cut horizontal slabs of cake. Your first one should be larger, as that’s the “stand.” Leave this separate from the rest. The body will be of uniform thickness, as thick as a Wii. Then stack them up, putting French butter cream frosting and cardboard in between each layer.
Cardboard is your friend. Alternate layers of cardboard with layers of cake as you stack up your Wii.
Put it all in the fridge. For about a half an hour, or until the frosting hardens.
Dowels. Okay, there’s still a lot of non-food items holding this all up, but you can eat around them. You’re going to want to push them all the way down the cake, through the cardboard. Sharpening them first will help. Have about two inches of the dowels sticking out from the bottom.
Fondant. Make some grey-colored fondant for the base and white for the body. Cover the base in grey fondant, then put the body on, shoving the dowels through so it stands up. Now wrap the body in fondant as you would a present, keeping the seams in the back.
Use a leftover slice of cake for the controller , covering it in the same white fondant. You can cut the buttons for the Wii and controller out of fondant, then use black and blue store-bought gel icing for the details.
Do not refrigerate. The fondant will “sweat,” leaving the Wii looking slimy.