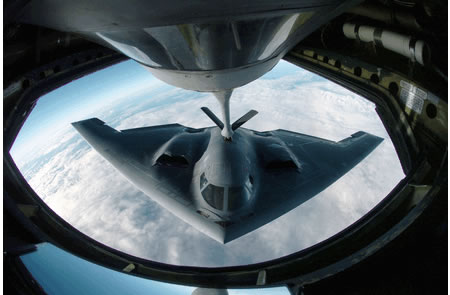 B-2 Stealth Bomber gets an obsolete upgrade

Not many know that in the early years of the 21st century, the main battle computer of a Royal Navy destroyer was still based around two 24-bit, 1 MHz processors each with 25KB of RAM. Similarly the B-2 Stealth Bomber up to now had an obsolete hardware with its equally obsolete programming language. The current OFP (Operational Flight Program) was written in a now-obsolete programming language called JOVIAL. A recent B-2 crash shortly after takeoff at the Pacific island of Guam was caused by a false sensor data feed into the OFP, resulting from an airspeed measuring device being affected by tropical moisture. The duff data fooled the OFP app into wrecking the $2bn bomber – while the pilots were unable to do anything to stop it. Northrop Grumman looks all set to upgrade the aging bomber into 90’s technology. The new IPU (Integrated Processing Unit) will use “Pentium class” processor chips , Northrop further announcing that they have figured out how to translate the code into a “newer, more modern programming language called C.

Among the other hardware upgrades are more bomb racks, massive bunker-penetrating super bombs, better comms, better radar etc – planned for coming years. This entire operation is named as ‘B-2 extremely high frequency and computer upgrades programme’. After reading this entire ordeal one wonders if any one from Northrop has ever picked a copy of a extreme technology magazine since the 80’s?
Via –
Source