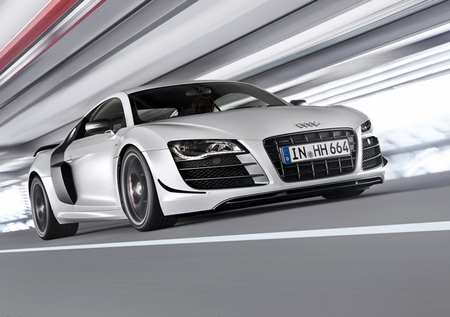 Audi’s R8 GT has been announced, It’s sleeker, lighter and faster than the original R8 V10

Audi’s uber sexy, uber sleek R8 GT has just been announced and she is a beauty in addition to all of the above. Not only has the company managed to make this version lighter, they added more power. What a great combo. Where they cut down is in the windshield for one that is now made of thinner glass and they’ve gone with polycarbonate rear windows. In places where the original Audi R8 V10 was fitted with aluminum body panels the GT has been fitted with carbon fiber. A total of 220 pounds have been shaved off this baby. Horsepower has been upped as well to 560. The GT is available in just one model – R-Tronic hydraulically actuated semi-automatic. It’s capable of accelerating to 62 miles per hour in just 3.6 seconds and on to 124 mph in 10.6 seconds. Terminal velocity has been increased to 198.8 mph.