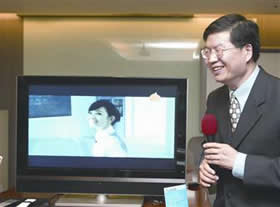 Asus to expand Eee family line to Desktops, TVs and a lot more

After the phenomenal success of the Eee PC, Taiwan based Asustek has has announced it is planning to launch a family of Eee products including: E-DT (desktop PC), E-TV and E-Monitor. The USP of the new product lineup will be the same low cost said Jerry Shen, president of Asustek. The E-DT or the desktop PC will come without a monitor and will be unveiled at Cebit 2008. The first E-DT will adopt an Intel Celeron processor, while later generations will adopt Intel’s Shelton’08 platform with Diamondville processors and the 945GC chipset. Asus will be pricing it in the $200 to $300 range and will eventually push the cost down to $199. The E-Monitor will be an all-in-one device and take on Apple’s iMac and Dell’s XPS One. The E-Monitor will have 19-21 inch screen and will have a built in TV tuner. Pricing is set at US$499, compared to the iMac’s price of US$1,199-2,299 and the XPS One’s price of US$1,499-2,399. E-Monitor will also be based on Intel’s Shelton’08 platform and will be launched in September this year.

Last but not the least the E-TV will be a 42 inch LCD TV but will integrate the Linux-based PC functionality of other Eee PC products. The cost will be not more than $200 of TV’s in the same class. Based on today’s pricing it should not cost more than $1200, the E-TV will be available in September.
Source