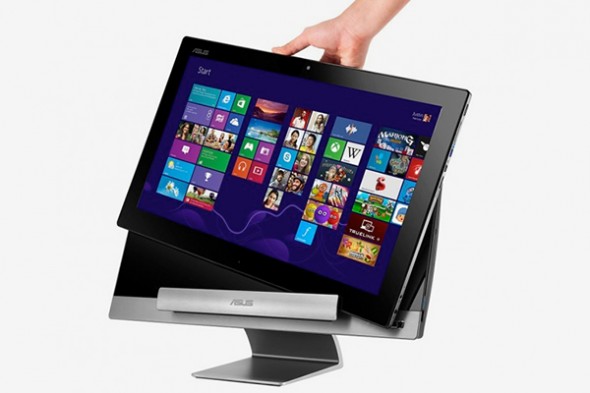 If you think – only smartphones are getting bigger, now is the time to reconsider it, ASUS on Thursday introduced a desktop/tablet hybrid which is monstrous in size. ASUS has creatively named it ‘Transformer AiO’- name apt for a tablet that weighs over 5 pounds and has an 18 inch screen. The Transformer AiO can transform from a Desktop running on Windows 8 to a tablet running on Android 4.1 Jelly Bean. Asus will start shipping the Hybrid sometime in Q2 with a starting price of 1299$. The Transformer Ai0 (All in One) works on two separate configurations, when docked to a PC station stand be in a desktop mode, it will run on Windows 8 power by Intel’s core i3/i5/i7 CPU. Graphics will be handled by an Nvidia GeForce GT730 GPU. The buyer will also get a choice between 1TB or 2TB Hard-drive and will come with a 4GB or 8GB RAM, an optical drive, HDMI port,4 USB 3.0 ports and a built in TV-tuner, all this built into the dock stand. Once the tablet is taken off from its stand, it will run either on Windows 8 tapping its resources stacked into the PC Stand wirelessly, as long as they are on the same Wi-Fi connection, or on the touch of a button it will run on Android 4.1 Jelly Bean. For Android tablet mode, it has a separate quad-core Nvidia Tegra 3 processor, 2GB of RAM and 32GB of local storage, built inside the tablet. 10 point multi-touch display measures in at 18.4 inches and a full HD resolution of 1920 x 1080 pixels.


The specifications and versatility of the Transformer AiO are amazing but one thing is for sure, the tablet on steroid will be very difficult handle or carry around. It would be interesting to see who goes out to but this monster.