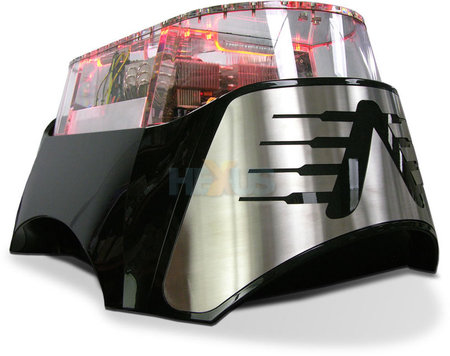 The folks over at Armari reckon that a truly über-PC should be stunningly, jaw-droppingly special, in the same way as an outlandish concept car from, say, Audi is special. It needs The makers at Armari wanted to build a custom PC so far removed from the present PC paradigm that it would be virtually unrecognizable, in both performance and looks, but it needs to be all that and still function as a workhorse. First mooted as a concept PC around two years ago, Armari wanted the super-PC to be a fully-functioning model that would make it, ideally, into a low-volume production run. Effective and efficient cooling of the components was key, and the design concept, shown below, was how the company envisioned the system to look. A fusion of two styles, evidently a sports car that is futuristic and a supercomputer. To my eyes it looks like one the very first inkjet printers which were giants compared to today’s wafer thin designs. Armari then spent six months working with The Product Works – a professional product-design consultancy – to get a complete SolidWorks CAD model, ensuring that the grounds-up cooling and component logistics would work correctly. Want to see just how complex top-of-the-line, custom cooling can be, and just why responsible firms spend mucho dinero on computer-based modeling before wielding the hacksaw and torch?

A further six months were spent on manufacturing a working prototype. The system was initially slated to use Intel’s maligned V8 platform, but was later changed to the current Skulltrail – incorporating two quad-core CPUs natively running at 3.2GHz on a motherboard that supported four graphics cards – when the design became available. This is what it looks like and yes it cost only around 10,000 pounds or roughly around $20,000 cheap for a super computer id say but expensive for a dull looking box.
Source