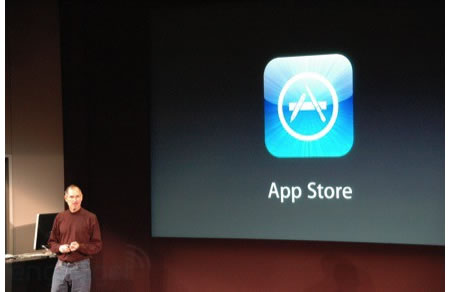 Keeping track of Apple always pays, if not in the form of cool gadgets then in the form of green bucks. The way to make money off Apple is to keep an eye on their hardware announcements and iPhone’s software strategy also the upcoming App Store, which could turn into a $1 billion market by next year. Investment bank Piper Jaffray’s analyst Gene Munster said his $1 billion market prediction represents the better of a three-case scenario that would add anywhere from 1 to 3% in operating income for the Cupertino-based electronics maker by the end of the 2009 calendar year . the analyst initially conceived a neutral case scenario in which he assumed 91% of a market comprised of 85 million multi-touch handheld users (61.6 million iPhoner users and 23.4 iPod touch users) would at one time or another tap into the App Store during the course of a year. Leaving the economics to the experts, lets just say that the Munster’s Neutral Case scenario assumes 77.7 million active App Store users will download two applications from the service each year at an average app revenue per sue of $10 (one free and one costing $10) resulting in sales of about $777 million and a profit of $163 million.

However, he notes that adoption rates could actually be much higher given the quality and ease of use of Apple’s iPhone experience or around 95 percent (or 80.8 million active users) which would bump revenues to $1.21B and profits to $254 million.
In a nutshell, if you are an Apple users or stock holder, you’re in a win-win situation.
Source