Apple announced the MacBook Air which boasts of being the slimmest notebook around. The laptop measure only .16-inches and is slim enough to slip into a manila envelope. The lappie features a full-size keyboard and LED-backlit 13.3-inch display with built-in iSight. It also sports a new larger trackpad that supports multi-touch gestures. Similar to the interface of the iPhone where you can pinch in or pan out, the MacBook Air’s trackpad allows you to do the same, it even allows you to rotate images with two fingers, and move windows with a flick. Apple was able to contain the size by using the same 1.8-inch 80GB drive that’s in the iPod classic. However the64GB SSD is optional. So far so good, but on the flipside just like an iPod, you can’t just crack it open to replace the hard drive, memory or even battery. On full charge the batter will last you five hours. Also the thing doesn’t sport an Ethernet port either. 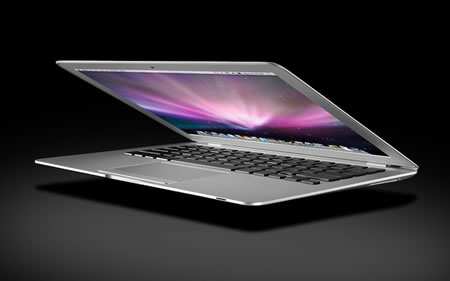 Apple MacBook Air steers clear of optical media, but there’s a separate external you can snap up for $99. The laptop also features something called the Remote Disk that’ll let the Air get data off the optical drive in any PC or Mac running the Remote Disk software. Pricing starts at $1799 and the Air will be shipping in two weeks.
Source