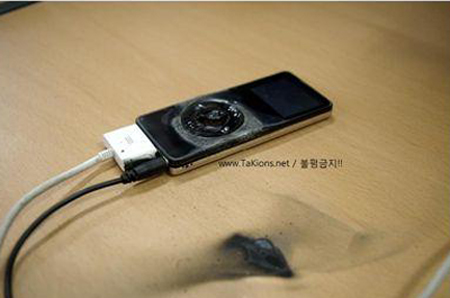 iPod and battery explosion problem? That’s very rare but you never know next time it well might be yours! Reportedly, a Korean man was out of luck as he was the unfortunate among million who’s iPod Nano exploded due to battery problem. The above picture shows his burnt iPod with a melted center and the place where it all went wrong. An Apple rep has acknowledged the incident, saying they are currently looking into it for further clarification. “At present, we are not able to officially comment on the particulars of the case,” said the company official. Only time will tell whether its just a stray incident or something else.
[Via Electronic Pulp]