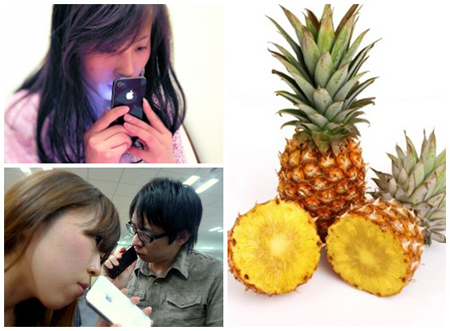 Apple iPhones in Japan smell like fruits while charging!

iPhones have been known to have users turn slightly socially-awkward, given that most owners spend more time with their Apple gadgets than the human race. Now, iPhone users across Japan have begun sniffing their iPhones, mistaking them for fruits! Reports popping up on webspace across Japan confirm iPhone headphone jacks to emit fruity smells like those of pineapples, peaches, apples and mangos while charging up. The smell could very well be the entrapped spirits of recycled materials sourced from fruits and organic material looking to grab the attention of Japanese users for reasons we simply cannot fathom. Also, Apple hasn’t responded to the claims and has stayed silent, probably awkward given the fact that Apples have begun smelling like pineapples and peaches these days.
[kotaku]