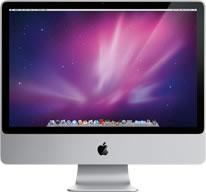 Apple geared up to include Blu-ray for new iMacs

Apple is all set to start a new line of its iMac desktops which will integrate a Blu-ray player for high definition media lovers. Apple has so far stayed away from the media war between the two competing formats, and even though it’s been little over a year since the war has been won by Blu-ray, the format is still ignored by Apple. The Apple netbook Air didn’t feature any optical drive, which is indicative of the industry all geared up for a HDD based media platform for the future.

Apple is quiet about the whole rumor as of yet but if they are to be believed then there are talks of better processors, graphics and HDD space above 1TB. The company has yet to offer Blu-ray as a standard or build-to-order option, but a few third party companies have been quietly testing the waters and marketing external Blu-ray burners to Mac users.
[Crave]