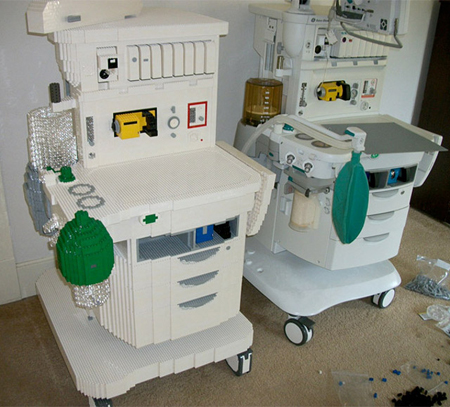 We’ve seen a lot of unusual stuff being sculpted out of them lovable Lego bricks. Once a toy for children that enabled them to unleash their creativity, Lego bricks have quickly turned into a favorable building tool for designers around. This latest creation we came across sticks to the healthcare plane of life. An anesthesia machine sculpted solely out of Lego bricks, this model is as detailed as you’d expect something of its type to be. Using a whopping 30,000 pieces of Lego bricks to create, this “anesthesia machine” looks just like the real thing and could pretty much fool any healthcare professional at a first look. By designer Eric Harshbarger, this model proves the fact that toys indeed could be used to create much more than instruments of childhood fun.
[geekologie]