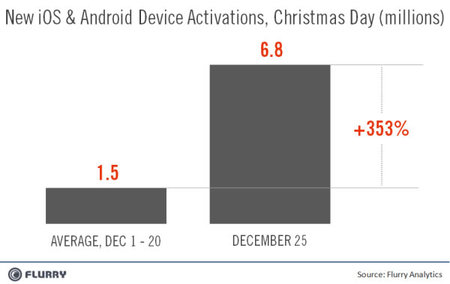 Besides being a festive celebration of Jesus Christ’s birth, this year’s Christmas now holds a different sort of record for the smartphone niche. Flurry Analytics has reported that on December 25th 6.8 million iOS and Android devices having been activated. However between December 1st and December 20th, the average number of activations hovered between 1.3 million and 1.8 million devices per day, whereas on Christmas this figure jumped by 353%. It goes without saying the application downloads to steered skywards on account of new device activations. So if you are still one of those people who are scared of using smartphones, you got to think again.