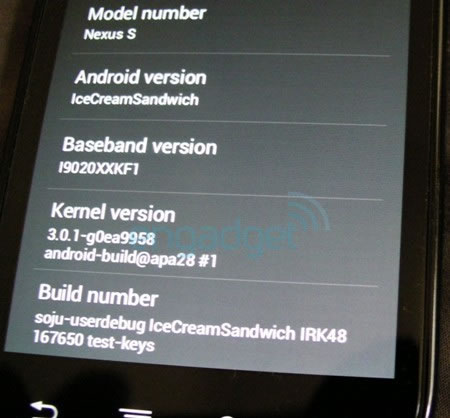 Here is something that will make Android fans go ballistic. This two minute video tour of the upcoming Android 4.0 Ice Cream Sandwich update has been scored by the folks at Engadget owing to the courtesy of some benevolent tipster. The tipster is some eBay shopper who picked up Samsung Nexus S and discovered that it was running a build of the next-gen Android platform.

The ‘About’ screen seems to be listed as IRK48 and kernel 3.0.1 and runs on the baseband of I9020XXKF1. Google had promised that this update will bring together the best of Gingerbread and Honeycomb goodness and the video says that they have kept their promise here. Another highlight here is the Google Apps icon which opens up a try of featured services. This update also embed one of the peculiar nuances of Honeycomb where pressing and holding down the home button brings up the vertical multi-task switcher. Besides these, the two minute clip also gives a preview of the lock screen, lock screen animation, widgets, and menus, revealing new shortcuts with minor changes in the notification bar and camera UI.