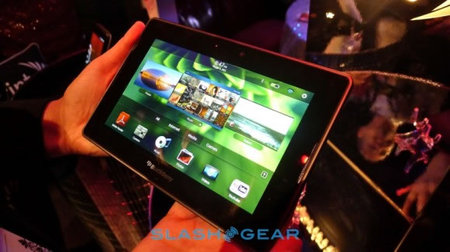 The Blackberry PlayBook tablet is almost a physical reality now! RIM is expecting shipments of one million BlackBerry PlayBook tablets in Q1 2011, with the first models being WiFi-only and 3G. The company aims to position itself besides Motorola’s Android-based XOOM tablet as a primary target. The PlayBook’s QNX-based OS and dual-core TI OMAP4430 chipset singles it out as a very capable contender, with a UI that brings together the larger screen size and the BlackBerry interface well.

A 4G WiMAX PlayBook version is also expected to make an appearance sometime in Q2 2011, taking Verizon’s LTE version of the XOOM. For more on the PlayBook, check out a demo from CES2011.
[Slashgear]