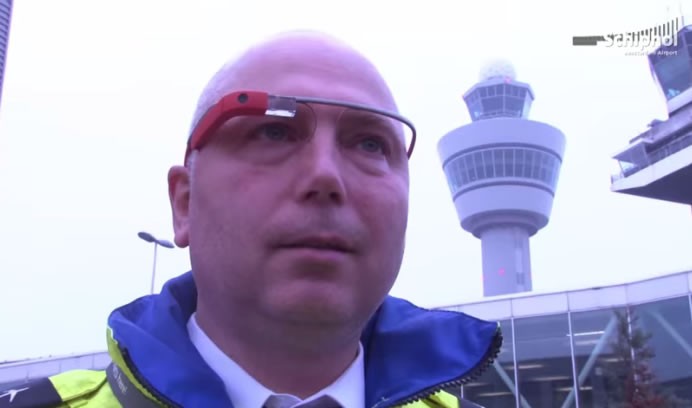 If you ever happen to be in Europe, Amsterdam’s Schiphol airport, to be more precise, and notice that a lot of people in uniform seem to be wearing Google Glass, don’t be surprised, it’s not a trend or a fashion statement but more of a handy tool for airport authority officers. Being one of the region’s busiest airports, authorities are testing the use of the micro-wearable computer to gauge, gather and assist with a variety of information from and for passengers who traverse the structure.

It seems to have a better ‘fit’ in niche industrial and service industry settings rather than for personal usage and that could just be its major USP. Airport authorities could use the technology to look up gate and airplane information for passengers by either scanning boarding passes or other details etc. and getting read outs via the glass directly or their connected smartphones. It was also reported that there’s a potential for officers at the airport to take digital measurements to better place barriers on the taxiway rather than using the old-fashioned manual methods.

Testing is already in progress with the help of a dedicated app for the users. There’s no word on whether or not they will become a permanent part of their ‘uniform’, but it does seem like there’s a hope that this live-view, wearable, hands-free technology could just make things a little bit easier for airport authorities. And just when you thought that it was just another one of Google’s many tried and shelved technologies, Glass makes a comeback.