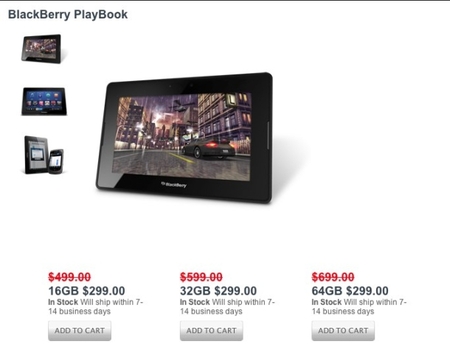 Now it’s getting a bit overboard with the pricing strategy of Research In Motion. All BlackBerry PlayBooks are likely to cost the same, be they 16Gb, 32Gb or 64Gb models. If you’re kicked about the idea then you can score the same only at official BlackBerry stores. So you can get a 64Gb device with a 7-inch display, 1Gz T1 OMAP4 dual-core processor, BlackBerry Tablet OS, and open room for upgrades.

The common pricing for devices is a standard $299. I wonder who would go in for 16GB models now. Outside the official stores it would cost you $499 for the top model.
CNet