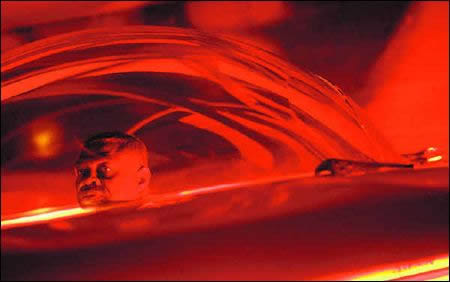 Alfie Carrington’s building his own UFO

Alfie Carrington has one huge hobby; he’s building his own spaceship for trip out to the heavenly skies. When he’s not at his day job as a construction worker, you can find him inside a rented storage garage in Clinton Township where he is working over a 14-foot-wide, carbon fiber, fiberglass vessel. He has spent almost half his life pursuing his passion. An out-and-out Sci-fi enthusiast, Alfie has been inspired by the Wright Brothers for his endeavors. Investing more than $60,000 in his creations lets see how far he gets on with his efforts. Starting out almost thirty years back, Alfie feels his simple design for an aircraft is what aeronautical engineers have spent millions trying to build. Aiming for a ‘Jetsons’ kind of vehicle he has two patents on the design and a company called Vertex Aerospace.

He is not guilty of being a computer geek either, so we hope that he meets his personal deadline of eight months from now. Although he still needs $40,000 for lift off!
Source