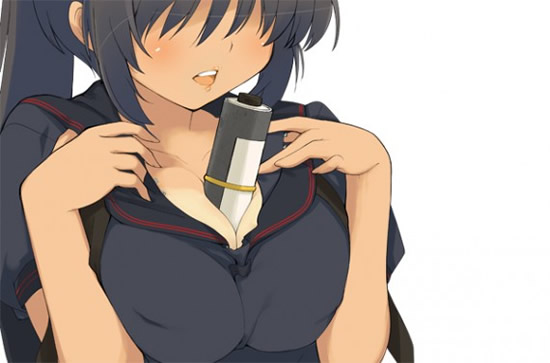 We have seen some strange promotional ads in the past, but when it comes to promoting a title that is about a series of ninja breast physics simulators for the 3DS, things can get a bit tricky. But not for the developers at MarvelousAQL, who designed the 3D bouncing breasts for Senran Kagura. The highly successful initial title has meant that a sequel has been set for release in the months to come, titled ‘Senran Kagura Burst’ and the developers have teamed up with Akihabara Café to launch a line of delicious deserts to get the promotion done.

The inspiration for the ice cream was drawn from the poster for the sequel which showcased the lead character in the title, Homura, with a diploma delicately nestled in her cleavage. The idea was immediately turned into an ice cream and while the fans of the series might love it, some of us might never be able to look at two scoops of ice cream in the same fashion again!