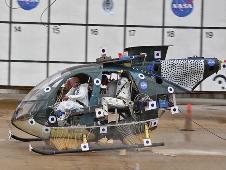 Airbags for helicopters, thanks to NASA

We may soon see those helicopter pilots exhaling in relief as they get this news come to them with a fair share of relief. Folks at NASA are working on helicopter airbags that will minimize the problem of crashes constant crashes with pilots having no way out. If you’re wondering why helicopter pilots don’t jump off with chutes before an evident crash, then keep in mind that it’s a helicopter that has some killer blades rotating, all set to slice you in tiny pieces. Tests have been conducted with a small helicopter that was dropped from a height of 35 feet, during which the chopper hit the floor at 54 miles per hour. It worked! The helicopter didn’t fall to pieces but landed on NASA’s ‘deployable energy absorber’.
[Crunchgear]