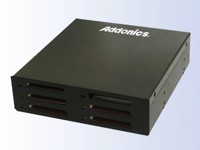 When we talk about storage drives, in the SATA league, we’re often bowled over because of the compatibility issues that hard drives have with other variants of media transfer. Addonics has just changed the whole scenario for data storage with their all new SATA adapter that accommodates up to six CF or CFast cards. Imagine the benefits of combining six memory cards in a RAID architecture or use them as six separate storage drives. Totally awesome!

The whole system accommodates itself on a 5.25-inch drive bay. These start at $135.
Engadget