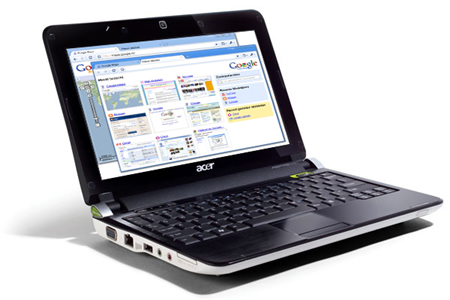 Acer takes on all challengers, says they have first Google Chrome netbook next year

It’s no secret that we’re all very eagerly awaiting the new Google Chrome OS. We’ve seen what it can do when they released their demo earlier and of course we’re already well versed with Google’s Android mobile OS and what that can do for the mobile segment so naturally we’d love to find out who they’ve got in store for us in the netbook domain. Of course we’re also very curious, I’m sure, to know who the first manufacturer of the first Google Chrome enabled netbook would be. That query has been answered as Acer’s Chairman J.T. Wang, in a recent interview, revealed quite confidently that they were going to be the first to bring netbook users the Chrome OS.

Acer was on the list of manufacturers that was announced earlier so it’s not a big surprise. We can’t expect to see any devices till sometime in the middle of 2010 though so there’s quite a bit of a wait. Google has been a little specific about the kind of features that Chrome OS netbooks should incorporate and those would include larger keypads and displays. Personally, I’m liking it already and I can’t wait to see if Acer delivers or for that matter, if someone, anyone, beats them to the punch.
Cnet