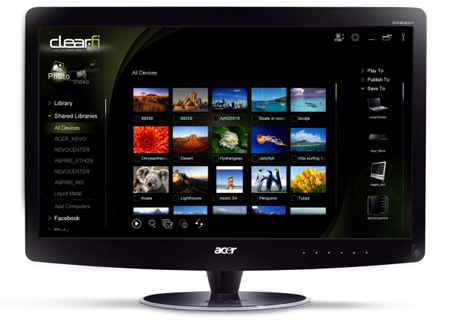 Bring home the ultimate Web interface, called the Acer DX241H. It’s an always-on device that quickly starts up and doesn’t need the cumbersome booting nonsense. It’s a good TV receptor as well, in conjunction with an Internet device. It’s like one of those all-in-one PCs that adds the goodness of Acer’s Clear.fi media-sharing application to share media such as songs, videos, images and more, DLNA, USB, HDMI ports, a contrast ratio of 80,000:1, 2ms response time and 1080p full HD support.

The Acer DX241H Web Surf Station will be available in May for £300 (~$496). It’s practically every device in one, sans portability and a camera.
CNet