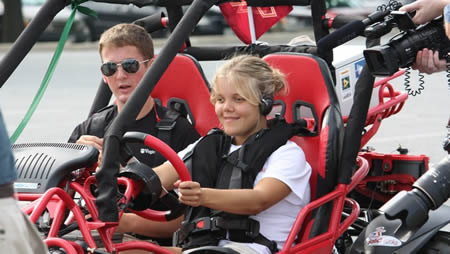 A vehicle for the blind driver is in the works, what will we think of next

We’ve finally reached a time in technology where it seems likely that we could have a working system for blind drivers. The National Federation of the Blind and Virginia Tech are working on a design and demo for next year that can be embedded into a vehicle to enable blind drivers to ‘get ahead’. This technology is called “nonvisual interfaces”. It makes use of sensors that transmit data to the driver about the surroundings. This could be in the form of haptic feedback or sounds. A subject will be chosen to test the very first vehicle for the blind in a simulated scenario at the Daytona International Speedway. In fact a similar design for the Defence Department was constructed by the university’s team that didn’t uses a driver at all and used the sensors to automatically work its way around obstacles.

Initially a dine buggy was rigged with sensor lasers and cameras and the driver was provided with a vest that provided feedback. Another interface was designed using gloves instead of a vest to provide feedback, this was called DriveGrip. The technology is progressing steadily and it won’t be long before a blind driver can walk into the DMV for a licence.
TBO