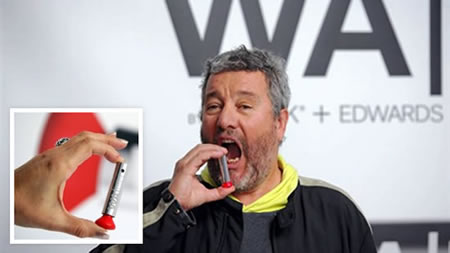 A spray gets you drunk instantly for a few seconds

Just yesterday, the next best possible way to give you a quick high was a conventional cigarette. Now, French American scientist David Edwards has come up with a better way to relax your jittery nerves for a few seconds, without burning a chunk of your lungs in the bargain. Called the WA|HH Quantum Sensations spray, this one gets you momentarily drunk for a few seconds, with no after-effects, hangovers or side-effects whatsoever! With the device designed by renowned designer Philippe Starck, this one administers a dose of 0.075 milliliters of alcohol, giving you an instant and momentary high!

That’s not all. This one can be disguise as a pepper-mint spray, just in case you plan to carry it along to movie halls or work places, and a user can pass just about any alcohol test after using it! And just like that, all our latent unanswered prayers have been answered in a jiffy.
[Gizmodo]