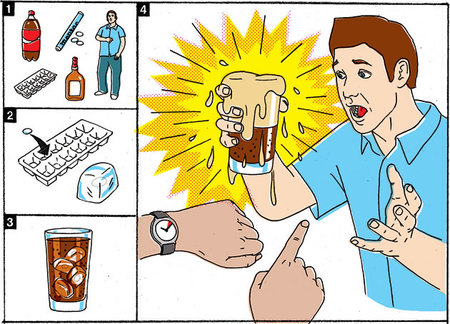 A new Mentos and Coke trick

Thanks to Wired, we have something new to try and blow up. This time again the ingredients remain the same as we have seen in that ever popular chain e-mail (which has made its way to me more than half a dozen times). All you need is 2 liters of Diet Coke, a pack of Mentos, rye whiskey and some Angostura bitters. First you have to fill the sections of the ice tray half with water and freeze it. Next you have to mix four cubes of ice and 8 oz. of Diet Coke with 2 oz. of whiskey. The bitters are for taste (bah!). The final eruption act happens when the ice melts.

The new trick is bound to be a success among youth. In fact we may most likely see a new YouTube video making rounds. I just hope that the guys at Wired get the credit that they’re due.
[Wired]